Share the experiences of a Despatch Rider during World War 1 by reading his own words written as a diary during his years on the Western Front.

Oswald Harcourt Davis joined the Royal Engineers in 1916 and arrived in Abbeville, Somme, France in July that year. He was attached to the ANZACs and dished out a Triumph motorcycle to carry pigeons and vital messages at a time when communications were limited and risky.

Read in fascinating detail his journeys around the Somme and Ypres Salient areas and the difficulties he had to face. Ever facing the danger of being “bumped” and “knocked” he rose to duty’s call and made sure the pigeons got through. He cheated death on several occasions and admits he was scared and on the brink of cowardice, yet he was brave enough for decoration. He was awarded the Military Medal at Messines.

TRIUMPH ON THE WESTERN FRONT

You can FREE download Oswald’s War Diary, Triumph on the Western Front, or purchase a copy for your bookshelf or Kindle e-book. Signed copies are also available.

Oz’s War Diary is supported by a FREE download Do-It-Yourself Battlefield Guide where you can follow Oswald (and the ANZACs) around the Somme and Flanders whilst reading his diary.

FREE download the Battlefield Certificate and when you reach the 8 Objectives you can get them officially stamped by emailing a selfie photo of yourself at the objective to: philipholdwaydavis@gmail.com.

This is a non-profit educational mission dedicated to the World War I War Remembrance Effort. We also honour my great-uncle, Cpl O H Davis MM R.E., a decent and brave man whom we hope, through reading his diaries, articles and books, you will get to know quite well.

“Chin Chin All The Best” 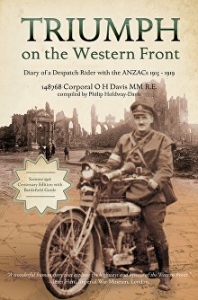 Purchase the latest edition which includes a battlefield guide, from any good New Zealand bookstore IBSN 9780473314637 or email me at philipholdwaydavis@gmail.com for a signed copy. 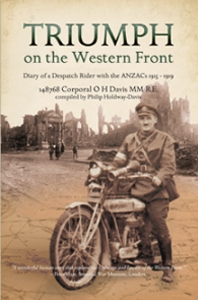 Purchase the original authorised first edition (does not include the battlefield guide) from Amazon in quality paperback or Kindle e-book. 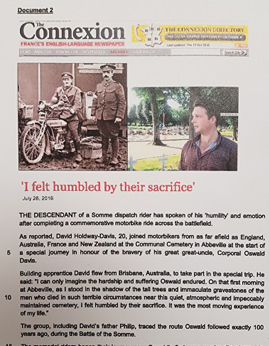 This is the World War One (WW1) or the Great War Diary of Corporal Oswald Harcourt Davis MM (Military Medal) R.E. (Royal Engineers) from Small Heath, Birmingham, England. Whilst the war lasted from 1914 to 1918, Oswald’s War Dairy spans 1915-1919. In 1915 he writes about life on the Home Front in Britain whereas in 1916 he arrives at the Somme in France on the Western Front. He puts us in the seat of his 1915 Model H Trusty Triumph motorcycle and drives us through Abbeville, Queurrieu, Amiens, Contay, Senlis Le Sec, Albert, Becourt Wood, La Boisselle, over the trenches, up Sausage Valley and back down the Bapaume Road, past Tara and Usna Hills and home. He mentions of the fighting at Pozieres, Mouquet (Mercourt) Farm, Courcelette and Thiepval.

Cpl Davis supports the 1st 2nd 3rd 4th and 5th Australian Division (AIF) in the Battle of the Somme and Pozieres (Posieres) Ridge. The Battlefield Guide provides details of the New Zealand Division (NZEF) battle of the Benzantin Ridge at Longueval, Caterpillar Cemetery, High Wood and Delville Wood for their advance at Flers.

Oswald takes on the duty of pigeon wallah, taking carrier pigeons up the line for the Australians also known as Aussies, Kangaroos and Cobbers. At Messines (Mesen) in 1917 he does likewise for the New Zealand (enzeds or enzeders) Kiwis and Diggers and also during the Battle of Passchendaele (Passendale) also known as the Third Battle of Ypres (Ieper). Oswalds unit is the Carrier Pigeon Service, Signals Squadron, Royal Engineers – a Ubique Sapper. Being his great nephew, this sure is a privilege having belonged to the same Regiment – the Royal Engineers. My other Regiments include Cold War service with the HAC (The Honourable Artillery Company) and the Royal Green Jackets (Greenjackets). My heart still is in the British Army and with the ANZACS – the Australia and New Zealand Army Corps, because I emigrated to New Zealand 25 years ago and all my children have since moved to Australia to live and work. I had no idea that Oswald was attached to the ANZACs until I read the diary 10 years ago. A fate meant to be!

The FREE Battlefield Guide also mentions details of Lochnegar Crater and Beaumont Hamel along with describing the New Zealand Pioneer Battalion (latterly the New Zealand Maori Pioneer Battalion) digging of Turk Lane the 8 kilometre super trench where the British Tommy (Tommies) first called the New Zealanders Diggers before the Aussie Kangaroo Cobber nicked Digger in 1917. But now I am on a mission to repatriate it!

On 3rd September 1916 Oswald leaves the Somme and rides all the way to the Ramparts and the Menin Gate via the Cloth Hall and St Martins Cathedral having driven through Northern France and Flanders (Belgium) after passing through Doullens and Poperinghe. It is there that Cpl Davis writes letters and joins debates at Talbot House (Toc H).

During the Battle of Messines he is awarded the Military Medal and continues his good service through the Battles of Menin Road, Polygon Wood, Broodseinde, s’Gravenstafel, Bellevue and Passchendaele. During the battles he is mainly involved in the Carrier Pigeon Service, Signals Company, Royal Engineers.

He interestingly calls the German by a number of names: Boche, Fritz, Hun, Jerry, Johnny, Kraut (Krauts) and Willey. The Battlefield Guide adds sausage eaters and squareheads courtesy of Australia.

Triumph On The Western Front